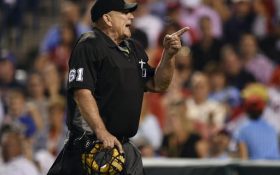 They’ve put the disabled list on the disabled list, as activists claim the designation for injured players – which has been in use in some form or another for more than a century – is offensive to people with actual disabilities.

So it’s getting designated for assignment.

Sponsored: God Encoded His Final Warning Inside You

Out with the DL, and in with the IL as “injured list” will be the official name at the start of this season.

The word “disabled” is OFFENSIVE to disabled people, or at least that’s what some advocacy groups claim!

“The disability community identifies with the term ‘disabled,’” Jay Ruderman, president of the advocacy group Ruderman Family Foundation, explained to the New York Times. “When it’s used incorrectly, when someone is injured, not disabled, that’s offensive.”

The league said in a statement that using the word to refer to injured players “supports the misconception that people with disabilities are injured and therefore are not able to participate or compete in sports.”

So while they’re not changing anything about the list – including the 10-day and 60-day designations as well as the roster rules for injured players – they’re changing the name, which is in line with other sports.

The NHL and NFL both put injured players on their injured reserve lists.

The NFL even has a second category with an unusual and innuendo-filled name: the physically unable to perform list.

No protests yet from people “unable to perform” in non-football ways.

The activists who have pressured baseball into changing the name are of course correct in that disabled people are perfectly capable of playing sports including baseball.

And they can play them at the highest levels… especially baseball.

Jim Abbott was born without a right hand and went on to have a decade-long Major League Baseball career.

He even tossed a no-hitter for the Yankees in 1993!

Three-time All Star and two-time World Series champ Jake Peavy is legally blind… which might give a him an intimidation edge as he throws a 92-mph fastball at hitters. (It’s OK, the 2007 NL Cy Young winner wears corrective lenses.)

If changing a name makes people feel better, so be it.

But English is a wonderful language where words have multiple correct meanings.

Disabled, of course, can refer to disabled people. But its other major meaning is incapacitated or inoperative, including temporarily. When a car is disabled, it’s not scrapped. You bring it – or have it towed – to the mechanic and it’s as good as new soon enough.

And that, at its heart, is the very nature of the meaning of the disabled list.

Players are injured. They are temporarily incapacitated. Then they return to play.

There’s no insults or judgements in that. Just a word, being applied correctly.

At the end of the day, “injured” is also just a word, too. There’s no harm in using it in this case, either, as other sports do.

But the change of the DL to the IL is yet another sign that people who rush to be offended are often quickly mollified, which leads to more people being more easily offended in hopes of getting the same response.

At least there’s one place where being offended doesn’t lead to a quick reward… and that’s when a batter is called out on strikes.

The ump doesn’t change the strike. He’ll toss the bum out of the game!

In any case, the fact that this story is even news does mean at least one thing good for America: baseball is back as Spring Training begins now.