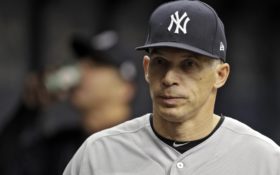 The person spoke to The Associated Press on condition of anonymity Thursday because the team has not announced the decision.

Kapler was fired after an injury-depleted team went 81-81 despite significant offseason additions highlighted by Bryce Harper’s arrival. He was 161-163 in his two seasons. The Phillies also interviewed Dusty Baker and Buck Showalter.

Girardi was one of the most prominent candidates to fill vacant managerial spots across baseball. He led New York to its 27th World Series title, beating the Phillies in six games in 2009.

He succeeded replaced Joe Torre after the 2007 season and spent a decade in pinstripes. He also managed the Marlins one season and was NL Manager of the Year after going 78-84 in 2006. His record with the Yankees was 910-710, the sixth most wins in team history.