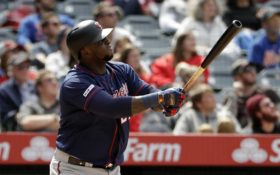 C.J. Cron believed in spring training that the Minnesota Twins were going to have a good offense this season. Their hitting hasn’t just been good, it has been powerful.

The Twins tied a franchise record with eight home runs and beat the Los Angeles Angels 16-7 on Thursday to complete a three-game sweep. The Twins— who also went deep eight times earlier this season at Baltimore — joined the 2005 Texas Rangers as the only teams in MLB history to have multiple games in a season with eight or more home runs.

“It’s all just kind of clicked and hopefully there’s no stopping,” said Cron, who had five hits, including a home run against his former team. “When you are hitting like this it is contagious. If you look at this lineup you are going to see a lot of power. We have the ability to do that and it is nice to show it.”

It was the third time in franchise history — dating to their days as the Washington Senators — Minnesota homered eight times.

“It’s pretty amazing. Our guys continue to go up there and not give up at bats,” manager Rocco Baldelli said. “We’ve had some games this season where we have hit a lot of homers. It’s not as if our guys go up there swinging for the fences.”

Schoop drove in four runs and Sano three as the Twins won six of seven on their road trip that began in Seattle and wound up with their first sweep in Anaheim since 1996. Minnesota, which leads the AL Central by eight games at 33-16, hit 22 homers against the Mariners and the Angels.

There were a total of 11 home runs in this game, which was originally set for Wednesday but postponed due to unplayable field conditions following a pregame storm.

The eight home runs also tied the Angels’ mark for most allowed. It previously happened twice, with the most recent being 2005 vs. Texas.

Four of the seven hits Matt Harvey (2-4) allowed in 2 2/3 innings went over the wall as the right-hander gave up eight runs for the second time this season. Noe Ramirez and Cody Allen allowed two long balls apiece.

“The long balls were killing us. It’s hard, like I’ve said times, to tell where on the plate it is but they came out swinging,” manager Brad Ausmus said.

Tommy La Stella hit his first grand slam in the ninth for the Angels, who have dropped four straight. David Fletcher and Brian Goodwin also homered for Los Angeles.

Minnesota broke open the game in the second inning with six runs, which included a three-run shot by Schoop and two-run drive by Polanco. Harvey was chased in the third after solo homers by Cron and Sano.

The Twins hit three home runs in the seventh to extend their lead to 14-2. Sano’s two-run shot and Schoop’s solo homer marked the sixth time the Twins had gone back-to-back this season. Kepler added a two-run drive.