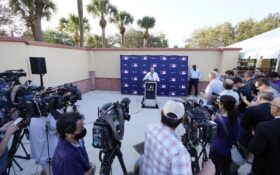 Baseball Commissioner Rob Manfred canceled 93 more games Wednesday, appearing to cut off the chance to play a full 162-game schedule and threatening locked out players with loss of salary and service time.

As the sides narrowed many economic differences to a small margin, they became bogged down over management’s attempt to gain an international amateur draft. Talks on that narrow topic were to continue Wednesday night.

In the meantime, at 6:30 p.m. on the 98th day of the lockout, Manfred announced two additional series had been canceled through April 13. That raised the total to 184 games wiped out from the 2,430-game regular season, or 7.6%.

“Because of the logistical realities of the calendar, another two series are being removed from the schedule, meaning that opening day is postponed until April 14,” Manfred said.

Given how close the sides are on economic issues, a breakdown over an international draft was both puzzling and stunning. But following years of simmering distrust that have heated to a boil, it also was predictable.

”There’s a lot going on in the world right now where you can certainly look out of touch,” Arizona Diamondbacks president CEO Derrick Hall said during a news conference. “I’m saddened by all this, saddened by everything.”

The union’s latest counteroffer was hand delivered by chief negotiator Bruce Meyer to MLB’s office shortly before 2 p.m. after he walked three blocks through a wintry mix from union headquarters.

While the gaps shrunk on the luxury tax, pre-arbitration bonus pool and minimum salary, management continued to press for its long-held goal of an international amateur draft. Players have repeatedly rejected the proposal since it was made on July 28.

“We never offered the Int’l Draft” tweeted Mets pitcher Max Scherzer, among the eight players on the union’s executive subcommittee. “We did discuss it, but MLB told us they were NOT going to offer anything for it. At that point, we informed all players & agreed to no draft.”

“The owners’ decision to cancel additional games is completely unnecessary,” it said in a statement. “After making a set of comprehensive proposals to the league earlier this afternoon and being told substantive responses were forthcoming, players have yet to hear back.”

Manfred had set a Tuesday deadline for a deal to preserve a 162-game schedule, and staff had started planning for opening day on April 6/7, back from the original March 31. The deadline was extended it to 2 p.m. Wednesday and then to 6 p.m.

MLB said it would not make a new counteroffer to players unless the union first chose one of three options:

— Agree to the international draft in exchange for the elimination of direct amateur draft pick compensation for qualified free agents.

— Drop compensation while giving players until Nov. 15 to accept an international draft starting in 2024 and giving MLB the right to re-open the labor contract after the 2024 season if players fail to accept the draft.

Players rejected all three options and instead proposed to drop compensation for this year, have the sides agree to a draft by Nov. 15 or then revert to compensation for the 2022-23 offseason. MLB said it did not receive that until after the 6 p.m. deadline.

“In a last-ditch effort to preserve a 162-game season, this week we have made good-faith proposals that address the specific concerns voiced by the MLBPA and would have allowed the players to return to the field immediately,” Manfred said. “The clubs went to extraordinary lengths to meet the substantial demands of the MLBPA. On the key economic issues that have posed stumbling blocks, the clubs proposed ways to bridge gaps to preserve a full schedule. Regrettably, after our second late-night bargaining session in a week, we remain without a deal.”

Manfred had called off the first two series on March 1, a day after his initial deadline for a deal. The latest cancellations included four series finales on Apri 14.

While Manfred did not use the word “canceled,” he left the apppearance 162 games no longer could be played due to baseball’s ninth work stoppage, its first since 1995.

“We were talking these last few days about taking those first two series and finding a way to get them back in the schedule,” Hall said. “From what I’m hearing now, these four series are out.”

If games are canceled on April 14 and players do not receive credit for service time in the eventual settlement, free-agent eligibility would be pushed back for many players, including Shohei Ohtani from 2023 to 2024, Pete Alonso from 2024 to 2025, Jake Cronenworth from 2025 to 2026 and Jonathan India from 2026 to 2027.

If cancellations go through April 15, the stoppage would spill onto the 75th anniversary of Jackie Robinson breaking the major league color barrier.

Management’s desire for an additional fourth tax threshold at $60 million above the first threshold is among the contentious points remaining.

Players dropped to $65 million from $80 million for their proposed bonus pool for pre-arbitration-eligible players, a day after MLB raised its offer from $30 million to $40 million. The union is asking for $5 million annual increases, while management’s offer is the same for all five years.

In the proposal for an international draft, teams would rotate picking in different quadrants of the first round over a four-year period, A slotting system would be installed similar to what the union agreed to starting in 2012 for the amateur draft covering residents of the U.S., Puerto Rico and Canada.

The international draft proposal includes hard slots that could not be negotiated by individuals. MLB estimates $17 million in additional spending for the drafted international players above the $166.3 million spent by the 30 teams in 2021, plus an additional $6 million on non-drafted players. The draft would start in 2024.

International players would lose the right to pick which team they sign with. The age for the draft would be in the year a player turns 16.