Mitt Romney SLAMMED by 2 Fox News stars (and his own family!) - The Horn News 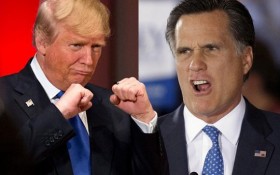 Utah Sen. Mitt Romney was sworn in Thursday afternoon — and the ceremony came amid a hailstorm of criticism following Romney’s recent op-ed in The Washington Post.

In fact, the blowback was so bad that Fox News star Tucker Carlson and Lou Dobbs, Sen. Lindsay Graham, and other conservative leaders slammed Romney. Critics called his op-ed an unfair attack on President Donald Trump… and that’s not all.

Even Romney’s family is refusing to back his statements.

Romney’s own niece, Republican National Committee chairwoman Ronna McDaniel, called on her “freshman senator” uncle to tone it down.

POTUS is attacked and obstructed by the MSM media and Democrats 24/7. For an incoming Republican freshman senator to attack @realdonaldtrump as their first act feeds into what the Democrats and media want and is disappointing and unproductive. https://t.co/ArhI7Bi7bo

Fox News star Tucker Carlson also got in his shots, saying Romney was out-of-touch with what made Trump popular among voters — and said his op-ed was more of the same failed policy from mainstream Republicans.

Fox News’ Lou Dobbs, a vocal supporter of Trump, went even further. On his show Wednesday, Dobbs called Romney a “RINO” (Republican In Name Only) and slammed the new Utah senator with some harsh descriptions.

Dobbs played a clip of Trump calling for Romney to be a better team player and shared McDaniel’s tweet, then went off on Romney.

Rollins warned, “Romney is going to be the leader of the opposition in the Republican party.”

“He’s going to be very bored with the job,” Rollins continued. “He’ll be on every talk show and his temptation will be to shoot his mouth off and change his positions and attack the president.”

Dobbs was incredulous when Rollins brought up that Romney had accepted Trump’s endorsement during the 2018 election.

“He is just… reprehensible. I can’t believe the people of Utah elected this creep!” Dobbs said.