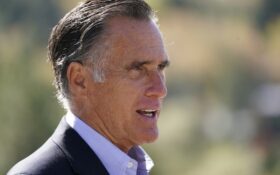 U.S. Sen. Mitt Romney was named the recipient of the John F. Kennedy Profile in Courage Award on Friday for splitting with his party and becoming the only Republican to vote to convict former President Donald Trump during his first impeachment trial.

The award was created by the family of the late president to honor public figures who risk their careers by embracing unpopular positions for the greater good, and is named after Kennedy’s 1957 Pulitzer Prize-winning book, “Profiles in Courage.”

“Senator Romney’s commitment to our Constitution makes him a worthy successor to the senators who inspired my father to write ‘Profiles in Courage,’ ” Kennedy’s daughter, Caroline Kennedy, said in a statement from the JFK Library Foundation. “He reminds us that our Democracy depends on the courage, conscience and character of our elected officials.”

Romney, 74, said he is inspired by the memory of his late father, George Romney, an automotive executive and governor of Michigan.

“When I think of courage, I think of my Dad,” said the Utah Republican, who is also the former governor of Massachusetts. “He did what was right regardless of consequence. I aspire to his example, though I have failed from time to time. We must subordinate our political fortunes to the causes of freedom, equal opportunity and truth, particularly as they are under assault here and abroad.”

Trump’s first trial in 2020 focused on the former president’s relationship with Ukraine. Romney became the first senator in U.S. history to vote for the conviction of a president who belonged to his own party, and was subject to intense criticism and even threats from Trump’s supporters.

But he did not back down, the foundation said.

When Trump and many Republicans questioned the legitimacy of the 2020 presidential election, Romney defended the integrity of the results and opposed efforts to overturn them.

After the Jan. 6 attempted insurrection by Trump’s supporters at the U.S. Capitol, Romney called on his fellow Republican senators to stand up for the truth about the election. At Trump’s second impeachment trial, Romney was one of seven Republican senators who voted to convict the former president of inciting the attack.

Kennedy’s book recounts the stories of eight U.S. senators who risked their careers by taking principled stands for unpopular positions. The award was created by the John F. Kennedy Library Foundation in 1989.

Romney will be presented with the award, a sterling silver lantern symbolizing a beacon of hope, at a virtual ceremony in May.