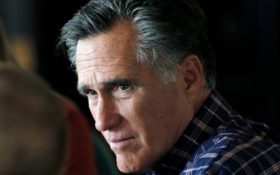 He once called Donald Trump “a con man,” but Mitt Romney now predicts that Trump would “easily” win his party’s presidential nomination in 2020 and “solidly” win a second term.

Romney, the GOP’s failed 2012 presidential nominee from Massachusetts, now a Republican Senate candidate in Utah, made the prediction Thursday as he welcomed dozens of high-profile business and political leaders to a mountainside retreat in Utah Thursday night. As he has every year since 2012, Romney played host to an invitation-only summit focused on the future of American leadership at home and abroad.

The future, he predicted, would feature Trump as America’s leader at least for another six years.

“I think that not just because of the strong economy and the fact that people are going to see increasingly rising wages,” Romney said, “but I think it’s also true because I think our Democrat friends are likely to nominate someone who is really out of the mainstream of American thought and will make it easier for a president who’s presiding over a growing economy.”

Yet Romney’s criticism has softened since then. And now, in the midst of a Republican Senate primary campaign, the former Massachusetts governor appears to be embracing Trump and his leadership role in the modern-day Republican Party.

He delivered the remarks on the first day of a three-day, closed-door summit in Utah’s mountains. The Associated Press was allowed to listen to Romney’s remarks during the event’s opening reception.

While there were many Trump skeptics in the crowd, a handful of Trump loyalists were in attendance as well, including short-lived White House communications director Anthony Scaramucci and Blackstone CEO Stephen Schwarzman.

It won’t be all business.

Guests will have an opportunity to go skeet shooting with Ryan or hiking with Romney.

“I’m looking forward to an unusual and packed couple of days here,” Romney said, suggesting he would have little more to say about politics. “Campaigns are off limits.”