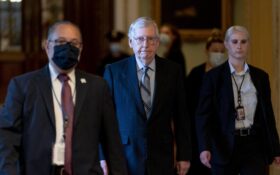 Momentum toward passing a $1.7 trillion government funding bill with more aid for Ukraine slowed considerably Wednesday as lawmakers struggled to reach an agreement on amendments needed to get to a final vote and avoid a partial government shutdown at midnight Friday.]

Senate Majority Leader Chuck Schumer, D-N.Y., said the Senate was making progress, but lawmakers exited the chamber late in the evening looking glum and talking of a standoff.

“This bill is hanging by a thread,” said Sen. Chris Coons, D-Del.

At issue is a proposed amendment from Sen. Mike Lee, R-Utah, seeking to extend pandemic-era restrictions on asylum seekers at the border, also referred to as Title 42.

“Sen. Schumer doesn’t want to have a vote on Title 42 because he presumably knows it will pass,” Sen. Mitt Romney, R-Utah, said. But the House won’t go along, he said, and “everything falls apart.”

The impasse came just hours after Ukrainian President Volodymyr Zelenskyy sought to assure lawmakers during a joint meeting of Congress that the aid the U.S. is providing was greatly appreciated and could “speed up our victory.” He projected confidence throughout and even told lawmakers in his closing: “Merry Christmas and a happy victorious New Year.”

“Your money is not charity. It’s an investment in the global security and democracy that we handle in the most responsible way,” Zelenskyy said.

The measure includes $44.9 billion in emergency assistance to Ukraine and NATO allies, above even President Joe Biden’s request, and ensures that funding flows to the war effort for months to come. The measure would also boost U.S. defense spending by about 10% to $858 billion, addressing concerns from some lawmakers that more investment in the nation’s military is needed to ensure America’s security.

Schumer’s hope was that the chamber would approve the bill as soon as Wednesday night, but several lawmakers exited the chamber saying they didn’t expect any more votes that night. Once the Senate votes, the House will then have to take it up and pass the measure before midnight Friday to avoid a partial-government shutdown.

Sen. Debbie Stabenow, D-Mich., emerged from a late-night meeting in Schumer’s office saying she was optimistic “about putting together a path” that would lead to the bill’s passage in the Senate on Thursday.

Schumer and Senate Republican leader Mitch McConnell, R-Ky., took to the floor Wednesday morning urging colleagues to vote for the measure, though they emphasized different priorities.

Schumer said the worst thing Congress could do now is give Russian President Vladimir Putin any signal that the U.S. was wavering in its commitment to defend Ukraine.

He doubled down on that message in the evening, saying he had just met with Zelenskyy.

“He made it clear that without this aid package, the Ukrainians will be in real trouble and could even lose the war,” Schumer said. “So that makes the urgency of getting this legislation done all the more important.”

McConnell is facing pushback from many Republicans who don’t support the spending bill and resent being forced to vote on such a massive package with so little time before a potential shutdown and the Christmas holiday. He highlighted the bill’s spending boost for defense and said that non-defense spending, when excluding a big boost for veterans health care, would increase below the rate of inflation.

“If Republicans controlled this chamber, we would have handled the appropriations process entirely differently from top to bottom,” McConnell said. “But given the reality of where we stand today, senators have two options this week, just two: we will either give our Armed Forces the resources and the certainty that they need, or we will deny it to them.”

The bill, which runs for 4,155 pages, includes about $772.5 billion for non-defense, discretionary programs and $858 billion for defense and would finance agencies through September.

Lawmakers worked to stuff as many priorities as they could into the sprawling package, likely the last major bill of the current Congress. The spending bill also contains scores of policy changes that lawmakers worked furiously to include to avoid having to start over in the new Congress next year.

Some Republican senators are raising objections to the measure, not only because the amount of spending but because of Congress’s habit of placing 12 separate appropriations bills into one massive package long after the fiscal year has begun and just before critical deadlines approach.

“Giving us a bill at 1:28 in the morning, that’s over 4,000 pages, that nobody will have an opportunity to read, that we’ll have no idea what’s in it, is not the way to run your personal life, your business life or your government,” said Sen. Rick Scott, R-Fla. “This has to stop.”

House Republicans, including Rep. Kevin McCarthy, R-Calif., likely the next speaker of the House, are encouraging their colleagues in the Senate to only support a short-term extension. That way, they would have more ability to shape the legislation. McCarthy spoke to senators during their caucus lunch Wednesday. A notice sent by GOP leadership to House members urged them to vote against the measure when it comes to the House.

“This deal is designed to sideline the incoming Republican House Majority by extending many programs for multiple years and providing large funding increases for Democrat priorities on top of the exorbitant spending that has already been appropriated this year,” the notice stated.