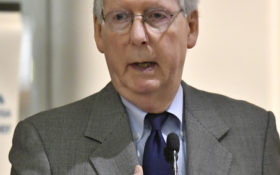 Senate Majority Leader Mitch McConnell on Thursday blasted House Speaker Nancy Pelosi’s $3 trillion economic relief bill a “totally unserious effort” to address the coronavirus pandemic, underscoring the deep divide over what Congress’ next response to the crisis should be.

Two days after Pelosi unveiled what would be Congress’ largest ever bailout bill, McConnell, R-Ky., said Democrats had produced a “seasonal catalog of left-wing oddities and called it a coronavirus relief bill.”

Provisions he singled out for criticism included a rollback of GOP-passed tax increases on residents of states with high taxes, language making it easier for people to vote by mail, and what he called “the cherry on top” — provisions helping legal marijuana businesses.

“This is a totally unserious effort,” he said.

House members scattered around the country because of the dangers of traveling and congregating in groups are returning to Washington. The chamber is expected to approve Pelosi’s package Friday in a largely party-line vote. The smaller Senate has been in session since last week.

36 million Americans have applied for unemployment benefits since the Wuhan virus hit the U.S. In addition, 1.4 million people in the U.S. have confirmed cases of the virus and more than 84,000 have died.

The bill unveiled by Pelosi, D-Calif., has been seen as Democrats’ opening bid in what seems likely to be negotiations with the GOP-led Senate and the Trump administration.

President Donald Trump himself has pushed for a reduction of payroll taxes that’s gained little support in Congress.

Trump has also cautioned GOP lawmakers not to box themselves in by opposing aid for state and local governments. Many state and local officials of both parties have sought more federal aid as they face eroding revenue and growing costs for unemployment and health programs.

McConnell has already said he doesn’t expect the Senate to begin considering additional legislation until after Memorial Day. He’s left the door open to a “narrowly targeted” bill and reiterated Thursday a chief GOP demand — provisions that would protect reopening businesses from liability claims.

Along with top Trump administration officials, McConnell and other congressional leaders have expressed worries about exploding budget deficits and said lawmakers should evaluate how the initial dollars are being spent before moving fresh legislation. They also want to see whether the economy begins to recover as some states begin easing restrictions that have kept many businesses shuttered.