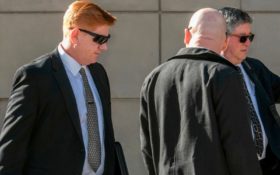 A mistrial was declared Monday in the case of a U.S. Border Patrol agent after an Arizona jury acquitted him of a second-degree murder charge in the killing of a teen from Mexico but deadlocked on lesser counts of manslaughter.

The decision by U.S. District Judge Raner Collins means prosecutors could seek another trial for Agent Lonnie Swartz on the manslaughter charges in the 2012 death of Jose Antonio Elena Rodriguez, who was fatally shot as he threw rocks at authorities during a drug smuggling attempt. Prosecutors say they were evaluating whether to pursue a retrial.

Jurors had deliberated about 18 hours over five days in what human rights attorneys say was the first prosecution of a Border Patrol agent in a fatal shooting across the border.

Swartz fired 16 shots late on Oct. 10, 2012, through a 20-foot (6-meter) fence that sits on an embankment above Mexico’s Calle Internacional, a Nogales street lined with homes and small businesses.

Prosecutors acknowledged during the monthlong trial that Elena Rodriguez was lobbing rocks across the border during a drug smuggling attempt. But they say he did not deserve to die.

Defense attorneys countered that Swartz was justified in using lethal force against rock-throwers and shot from the U.S. side of the border in self-defense.

Art Del Cueto, head of the Tucson union for Border Patrol officers, said: “I believe that justice was properly served. The jurors took their time, and we’re pretty happy with it.”

Prosecutor Elizabeth Strange said her office respects the jury’s decision. “I am proud of our office’s work in presenting this difficult case to the jury,” Strange said.

The Border Patrol came under close scrutiny during the Obama administration for allegations involving excessive use of force. Customs and Border Protection, its parent agency, reported 55 incidents in which employees used firearms from Oct. 1, 2011, to Sept. 30, 2012. The number of incidents fell to 17 for the same period five years later.

Swartz initially was charged with second-degree murder in the shooting of Elena Rodriguez in Nogales, Mexico.

Collins told the jury in his instructions that they could consider a lesser charge of voluntary or involuntary manslaughter if they had trouble reaching a verdict on the more serious charge.

During closing arguments, Assistant U.S. Attorney Wallace Heath Kleindienst said Swartz “was fed up with being rocked” after being targeted in at least six other attacks.

“He was angry with those people who had been throwing rocks against the fence,” Kleindienst said.

Defense attorney Sean Chapman argued there was “not a scintilla of evidence” that Swartz was angry or fed up.

He said Swartz shot because he was trying to protect himself and his fellow agents during a drug operation.

“From his first day in the Border Patrol, it had been ingrained in him that rocks were dangerous,” Chapman said.

The trial played out as President Donald Trump called for National Guard troops to be sent to the Mexican border to free Border Patrol agents to concentrate on stopping drugs and people from illegally entering the United States.

Trump has made his crackdown on illegal immigration and building a wall along the U.S.-Mexico border a cornerstone of his presidency.

The killing of Elena Rodriguez was felt deeply in the twin communities of Nogales, where about 20,000 people live on the Arizona side and about 300,000 in Mexico. The communities are linked by family members, trade and culture and have long been referred to locally as “Ambos Nogales” – “Both Nogales” in Spanish.

During the trial, jurors visited the border area at night to get a better idea of what Swartz was facing.

The agent, who has been on administrative leave pending the trial’s outcome, testified that he remembered little of what happened.

The Border Patrol has not said if he was receiving his salary.

Sponsored: How to have more energy: get THESE out of your body as soon as possible [shocking]

A parallel civil case filed by the teen’s mother against Swartz seeking monetary damages is pending before the 9th U.S. Circuit Court of Appeals in San Francisco.