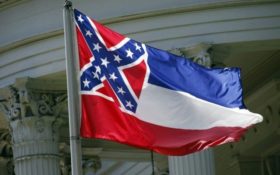 Mississippi universities that refuse to fly the Confederate-themed state flag could lose proposed tax breaks, the latest twist in a long battle over a symbol critics see as racist.

All eight of Mississippi’s public universities have stopped flying the flag because it prominently features the Confederate battle emblem, angering supporters of the banner.

The state House voted 57-56 Wednesday to withhold proposed tax exemptions to public universities that refuse to fly the flag. A top lawmaker says the flag provision is likely to disappear from the final version of the bill, however.

Republican Rep. William Shirley of Quitman wrote the flag amendment but said it has nothing to do with the current design. He says universities should fly the state symbol, whatever it is, if they take state money.