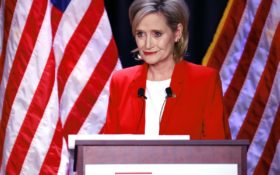 The final chapter of the 2018 midterms is nearing a close in Mississippi, where the prevalent theme of President Donald Trump has made for a much closer contest than anyone expected in one of the country’s most deeply conservative states.

Republican Sen. Cindy Hyde-Smith, appointed to the seat in April, gives unwavering support to the president who will campaign for her at two rallies on Monday, a day ahead of the runoff. She is up against Democrat Mike Espy, a former congressman and U.S. agriculture secretary.

The winner Tuesday finishes the final two years of a term started by Republican Sen. Thad Cochran. He resigned in April amid health concerns.

It’s the last U.S. Senate race to be decided in 2018 and will determine whether Republicans pad their senate majority.

Hyde-Smith’s support of Trump is unmistakable. She used both her opening and closing statements of the only debate of the runoff campaign to promote Monday’s presidential rallies, citing the online address to get tickets. Even on trade and tariffs, where Trump’s decisions could hurt Mississippi farmers, Hyde-Smith praised the president.

“I have met with the president, and I proudly support him in negotiating these trades,” she said. “All the Mississippi farmers want is a fair deal, and I’m excited that the president has stepped up to renegotiate these deals.”

The president has also thanked her right back on Twitter for voting for “our Agenda in the Senate 100% of the time.”

Hyde-Smith and Trump are set to appear together at a late Monday afternoon event in the northeastern city of Tupelo, best known as the birthplace of Elvis Presley. Then, they fly to the Gulf Coast for a larger evening rally in Biloxi.

Democrats also have used some star power. Former Vice President Joe Biden has endorsed Espy, and three Democrats who could run for president in 2020 — Sens. Kamala Harris of California and Cory Booker of New Jersey and former Massachusetts Gov. Deval Patrick — have been to Mississippi to campaign for the former congressman who served as agriculture secretary in 1993 and 1994 under Democratic President Bill Clinton.

For Espy, turnout is key. He has to close the gap in a state where Trump received 58 percent in 2016 and that hasn’t elected a Democrat to the U.S. Senate since 1982.

Espy hasn’t hammered Hyde-Smith on Trump at every turn.

His campaign has focused more on issues such as social justice, health care and raising wages.