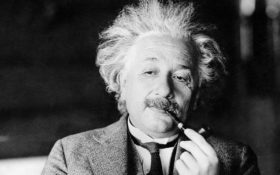 It’s a real-life “Da Vinci Code” as one of the greatest minds in all of human history left behind a puzzle that has keep scholars mystified for decades.

Now, it looks like the riddle left behind by Albert Einstein may have FINALLY been solved.

And it’s only taken nearly a century!

Two weeks ago, Hebrew University of Jerusalem received a trove of Einstein documents – including a handwritten page that didn’t quite seem to belong to anything else.

Except it did belong to something else.

It was, in essence, a missing link in his attempt at solving unified field theory.

“This article was one of many in Einstein’s attempts to unify the forces of nature into one, single theory and he devoted the last 30 years of his life to this effort,” Hebrew University said in a news release.

A never-published 1930 essay known to Einstein scholars laid out much of this theory.

“But in the copies we had, one page was missing,” Hanoch Gutfreund, scientific advisor to the university’s Einstein archives, told the AFP news agency. “And that was a problem. That was a puzzle.”

That seemingly random note in the new collection was the long-lost missing page.

“To our surprise, to our delight, that page is now here,” he told AFP. “It came with the new material.”

What is this puzzling theory?

It was a theory he worked on literally until his dying day.

“Even while lying on his deathbed, he continued his work,” the organization said. “The day before he died, he asked to have his latest notes brought to him.”

There are also dozens of other pages containing notes and scribbles, including some math formulas and calculations.

So far, scholars haven’t been able to figure out several of them.

“The scientific connection of many of these calculations is still not clear,” Hebrew University told Haaretz.

In other words, there are still more Einstein puzzles to be solved… and who knows, there might be another great discovery hidden in those calculations!

While the missing page is the most eyebrow-raising discovery in the new collection, it’s not the only one.

It contains his thoughts on everything from the evils of Naziism to trash-talk on the other big names of the day.

In the early 20th Century, the world was enamored by Sigmund Freud, the father of modern psychotherapy.

When it was suggested that his son could be treated by Freud, Einstein wrote that he wouldn’t pay for any visits to that “crazy house of treatment.”

I am almost positive that the thing with the Viennese doctor is a simple swindle, and I am very surprised that no one in Zurich is preventing your mother from falling for it and so to ruin her financial position even further.

Many people might agree that Einstein was just as ahead of his time on that as he was with his scientific work!

Another surprise? Einstein – a man so closely linked to Jewish identity that he was offered the presidency of Israel despite not even being a citizen – claimed he didn’t know Hebrew.

Writing to a friend and fellow scientist Michele Besso, who had converted to Christianity, Einstein was impressed to hear the man was learning Hebrew despite the change in religion.

“As a goy (non-Jew), you are not obliged to learn the language of our fathers,” Einstein wrote. “Whilst I as a ‘Jewish saint’ must feel ashamed at the fact that I know next to nothing of it. But I prefer to feel ashamed than to learn it.”

It even contains his thoughts on one of the mysteries that puzzled him most, but it wasn’t about gravity, time, space, energy or matter.

It was the nature of a simple beam of light.

“Fifty years of thought have not brought me closer to the question of what light particles are,” he wrote in one letter. “Today every simpleton thinks he knows the answer, but he is fooling himself.”