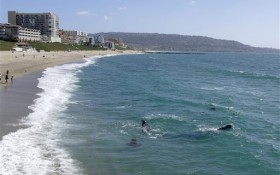 A pair of Florida teens saw their prayers answered after becoming stranded about 2 miles (3 kilometers) from shore.

News outlets report that 17-year-olds Tyler Smith and Heather Brown were swimming at Vilano Beach near St. Augustine during a senior skip day last month when strong currents pulled them out to sea.

The Christ’s Church Academy students say they were holding onto each other and praying to God for help just before Captain Eric Wagner and his crew spotted them. The boat was called the Amen.

Crewmembers pulled the teens on board and contacted the U.S. Coast Guard.

Smith and Brown are set to graduate later this month.