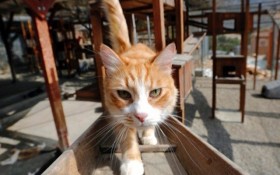 A cat named Meow has been reunited with her suburban Kansas City owners after she went missing nearly three years ago.

The Kansas City Star reports that Meow escaped after Taylor Jezik moved to a new apartment complex in Gardner, Kansas. Jezik searched for Meow in her old neighborhood, posted pictures on Facebook, called animal shelters and looked along roadsides for dead cats. She says her young son, Charlie, was devastated.

Then Tuesday, she received a text message saying her cat had been found. Gardner police said the cat was spotted outside after a rainstorm and taken to an animal hospital, where employees scanned Meow’s microchip.

Jezik recalled that she “instantly started crying” when an animal control officer sent her a picture of Meow. She says she’s “still in shock.”