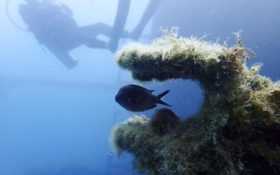 A swimmer struggling in the sea off Sardinia soon discovered it was his lucky day.

Italian news agency ANSA says the male tourist got in trouble Sunday afternoon after his inflatable swan was carried away by the wind. According to a witness, the swimmer’s friends alerted a life guard — but someone else was closer by.

Former world champion swimmer Filippo Magnini, who won bronze at the 2004 Athens Olympics, had no problem in reaching the man in a few quick strokes.

Magnini told La Gazzetta dello Sport that “the swimmer was in trouble. At a certain point, he got scared, couldn’t move and swallowed a bit of water. When I reached him, he couldn’t even speak.”

Magnini kept the man afloat until the lifeguard arrived.

“I did what I felt I should do,” Magnini said. “Swim as fast as I could to save him. The important thing is the swimmer is safe.”

The 37-year-old Magnini was swimming nearby with his girlfriend, Italian model and TV personality Giorgia Palmas.

Magnini, who won the 100-meter freestyle at the 2005 and 2007 world championships and a relay bronze at the 2004 Olympics, received a four-year ban for doping in 2018 after he had retired. He never tested positive and denied any wrongdoing.