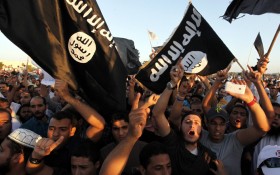 Residents in Pittsburgh, Pennsylvania are sighing in relief after a recent latest arrest — it just might have saved countless lives.

A Syrian refugee in the U.S. was arrested for allegedly plotting a radical Islamic terror attack in Pittsburgh, Pennsylvania this week.

All in the name of ISIS.

According to Pittsburgh Action 4, Alowemer believed he was planning the attack with ISIS allies but was actually talking to undercover FBI agents. He first appeared of agent’s radar via social media, where he offered information on ideal attack targets, such as the Christian church.

The refugee-turned-terrorist provided plot details to the undercover FBI agent, bomb materials he’d purchased, and printed copies of Google satellite maps with markings showing the location of the church with arrival and escape routes.

As authorities uncovered his plan for the attack, the details grew more grisly.

As recently as Sunday and Monday he was seen buying boxes of nails, likely to be used as shrapnel.

Officials say that Alowemer planned two bombings at the same location: one to destroy the Christian church and a second for when the police arrived. At the site of the bombing, he wanted to raise the flag of ISIS with a message ready, “We’ve arrived.”

The criminal complaint filed alleged that the 21-year-old Syrian refugee planned to carry out the bombing next month by delivering the explosives in a backpack.

Pastor Michael Day, of the Legacy International Worship Center that was targeted, maintained that he wouldn’t be intimidated with God on his side.

“Feel safe. We are working right now as we speak to make sure that everybody feels safe, comforted and that peace is here.”