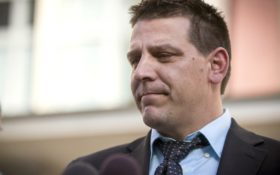 A Minnesota man who was molested decades ago by the man who went on to abduct, sexually assault and kill Jacob Wetterling was awarded more than $17 million in damages, in a ruling made public Thursday.

Jared Scheierl was 12 when he was molested by Danny Heinrich in 1989 in Cold Spring. The attack happened months before Jacob, 11, was abducted from a rural road near his home in St. Joseph.

In 2016, Heinrich admitted to sexually assaulting Scheierl and to abducting, molesting and killing Jacob as part of a plea deal in a federal child pornography case. As part of the deal, Heinrich led authorities to Jacob’s remains, ending a nearly three-decade search for the boy, but he did not face charges in Jacob’s death.

It was also too late to prosecute Heinrich for Scheierl’s attack, but Scheierl sued him. The Star Tribune reported that Stearns County Judge Andrew Pearson awarded Scheierl damages.

“How does this court put a value on the diminished quality of life that Mr. Scheierl lived as a result of Mr. Heinrich’s act?” Pearson wrote. “It’s been said that a human life is worth more than all the treasures of the world.”

Heinrich is serving a 20-year federal prison sentence and it’s unlikely he’ll be able to pay the damages.

The Associated Press doesn’t routinely identify victims of sexual abuse, but Scheierl has spoken publicly about his attack. He said he was walking home from ice skating and drinking a malt when Heinrich pulled up in a car and pulled him inside, saying he had a gun. Heinrich assaulted Scheierl in the back seat. DNA later linked Heinrich to the assault.

Scheierl testified in October that he became consumed with finding his attacker and suffered from nightmares, depression and anxiety that affected his life.

Pearson found Heinrich liable for $10 million in punitive damages, due to the seriousness and cruelty of his crime, the length of time he concealed it and the fact that he won’t face prosecution for it or for Jacob’s assault and murder. The rest of the award includes damages for pain, suffering and emotional distress, and compensatory damages for lost income, lost earning capacity and counseling.

“This amount is necessary to punish Mr. Heinrich and deter others like him from acting similarly,” the judge wrote. “It is not excessive based on the unique circumstances of this case and is in line with awards in other cases from Minnesota and elsewhere.”

Scheierl said he felt some relief when he heard of the judgment and believes it will help him move forward, after he learned that his case would never be prosecuted. He said that while he was happy that Jacob was found, “there was a bitter aspect of just not having justice in regards to my case … for almost 30 years of pain and suffering.”