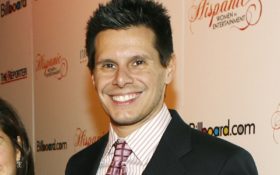 Award-winning producer Silvio Horta, who was acclaimed for creating the hit series “Ugly Betty” with actress Salma Hayek, has died. He was 45.

The Miami-Dade County Medical Examiner said Wednesday that based on the investigation Horta died by suicide at a Miami hotel on Tuesday.

The Cuban-American producer and screenwriter is credited for breaking ground for Latinos and gays in Hollywood with a show about a Mexican-American woman who arrives for her first day working at a New York fashion magazine in a poncho. The sitcom made actress America Ferrera a star.

Ferrera and others in the entertainment industry, including singer and actress Vanessa Williams, mourned his death on social media.

“His creativity and passion will be missed by so many of us that worked with him,” Williams tweeted.

Horta’s family said in a statement that “Silvio touched the lives of millions,” but he had an ongoing struggle with addiction and depression.

“Through it all, he always found a way to turn his struggle into laughter,” “ the statement said. ”He was a kind and beautiful man. He may be gone but his light will shine on.”

Sponsored: The Safest, Most EffectivePain Reliever on the Market

A service will be held in Miami, and a memorial services is planned for Los Angeles.