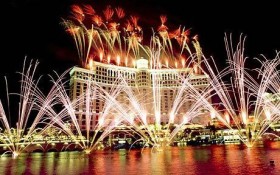 Two former craps dealers at the Bellagio casino in Las Vegas and two of their friends have been accused of siphoning more than $1 million off gambling tables over nearly two years by quietly paying phantom bets.

A prosecutor said Thursday that the scheme unraveled after another dealer became suspicious and notified casino investigators. The Bellagio fired James Cooper Jr. and Mark Branco, and they were arrested in July 2014.

A 60-count indictment filed Wednesday accuses Cooper, Branco, Jeffrey Martin and Anthony Granito of theft and cheating at gambling. Both charges are felonies and could get the men decades in prison.

Attorneys for the four men didn’t immediately respond to messages.