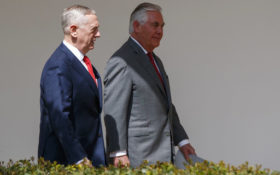 The military services are warning that their combat operations and training will be curtailed severely if Republicans and Democrats fail to end their bickering over the federal budget and pass only a stopgap spending measure, according to Pentagon documents.

Ships won’t leave port, aircrafts will be grounded, weapons modernization programs will be postponed and critical industrial skills could be blunted should Congress approve another so-called “continuing resolution” for the remainder of the 2017 fiscal year, according to military documents assembled to buttress the Pentagon’s plea. These documents were recently sent to members of Congress.

“We will have to cease flight operations within (the United States) at the end of July 2017,” the Marine Corps assessment reads. “Cancel three surface ship deployments, resulting in gaps in European and Central Commands,” the Navy said. A stopgap bill, according to the Air Force, “limits our ability to rebuild” and increases the risk to the warfighter.

The chiefs of the Air Force, Army, Marine Corps and Navy are expected to amplify these concerns at a House Armed Services Committee hearing scheduled for Wednesday. They’ll argue for Congress to approve a $578 billion defense bill for 2017 and also pass a $30 billion supplement to the legislation that President Donald Trump requested last month.

Senior U.S. military officials have cautioned many times before about the need for Congress to avoid stopgap measures and do its job of passing individual spending bills. Yet the deep ideological divides have stoked worries that another continuing resolution is in the military’s future.

A temporary government-wide spending bill approved late last year runs out at midnight April 28. Behind the scenes, lawmakers are working on the $1 trillion-plus legislation to keep the armed forces and the rest of government running through Sept. 30, the end of the fiscal year. But lawmakers have a two-week recess in the middle of April, which leaves little time to hammer out an agreement that will win enough support.

Under a continuing resolution, the Pentagon’s budget is locked in at last year’s level and the military services are barred from starting new programs. The upshot is that the services are forced to take money from their procurement and training accounts to pay for combat operations.

The Army’s information paper said that a continuing resolution that runs until the end of September would force the service “to essentially cease training” on July 15. The impact on the service’s immediate readiness for combat will be severe, according to the document.

“This means that our decisive action readiness will degrade and our risk increases with the loss of the training and the training time that cannot be bought back,” the Army said.

The service estimated that dozens of weapons procurement initiatives will be affected, including programs to make munitions more lethal and acquire better combat vehicles and helicopters.

A catch-all temporary spending measure would leave the services unable to maintain the active-duty troop levels ordered by Congress, according to the documents.

The Air Force would have to absorb a $464 million cut. That would lead to a halt in airmen changing stations inside the United States, causing a severe training backlog. Families would feel the impact too.

“Summer moves will be delayed until fall and spring, causing families to move while children are still in school,” the Air Force document said.

Trump also is seeking a $54 billion increase in defense spending for the 2018 budget year, which begins Oct. 1.