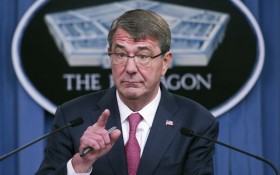 The military services are already beginning to recruit women for combat jobs, including as Navy SEALs, and could see them serving in previously male-only Army and Marine Corps infantry units by this fall, according to new plans endorsed by Defense Secretary Ash Carter and obtained by The Associated Press.

Some of the services predict that only small numbers of women will volunteer or get through training courses, details of the plans show. The Marine Corps estimates 200 women a year will move into ground combat jobs. And the U.S. Special Operations Command said it anticipates a “small number” of volunteers for its commando jobs.

The Navy said it is already collecting submission packages from prospective SEAL candidates and could see women in entry-level enlisted and officer training in September and October. The Navy started collecting the packages last month.

All of the services say they have made required changes to base bathrooms and other facilities to accommodate women, and they will monitor training, injury assessments, and possible sexual harassment or assault problems.

The plans have been under review by senior Pentagon leaders and have not been made public.

Carter said Thursday that he accepted the services’ implementation recommendations, but provided no details. He is expected to sign a memo in the coming days telling the military to begin executing the plans next month.

The top Army and Marine Corps generals told senators last month that it will take up to three years to fully integrate women into all combat jobs. And they have insisted they will not lower standards for the combat posts or bow to pressure or quotas to get more women into the grueling frontline jobs.

After a lengthy review by the services and the Pentagon, Carter in December ordered all combat jobs open to women. The Marine Corps initially sought to keep certain infantry and combat jobs closed, citing studies showing combined-gender units are not as effective as male-only units. But Carter and Navy Secretary Ray Mabus rejected that proposal.

Since then, the military services have put together plans outlining exactly how they will incorporate women into the male-only units.

The Marine Corps said that having about 200 women moving into combat jobs each year would mean that they would make up less than 2 percent of the Marines in those occupations. The Corps would use what it called a “teaming concept” that would try to assign two or more junior enlisted women to the same unit.

The plan notes that so far no women have made it through the Marine infantry officer course, and added that, “we recognize there may be small numbers, and the Services are prepared to handle this.”

Last year several hundred female Marines participated in a task force studying the impact of allowing women to compete for combat jobs. The enlisted women who were in the program are eligible to transfer immediately into combat jobs since they already completed the training. Although some have expressed interest in the jobs, none have formally requested a transfer.

The Army intends to first assign female officers to jobs in the infantry and armor units, and then gradually bring in female enlisted soldiers. And it plans to also assign more than one woman in a unit.

The first officers will start training in June, and could graduate in October. The first female enlisted soldiers wouldn’t begin moving into ground combat units until May 2017.

Unlike the Army and Marine Corps, the Air Force said it will not assign women in groups to units, and will instead follow routine assignment procedures.

The bulk of the male-only units are in the Army and Marine Corps. Only a few of the Navy and Air Force units excluded women, and those were largely special operations-related jobs and assignments on ships that do not have adequate berthing to accommodate women.

The military services said they plan to carefully evaluate recruits, including new types of testing that helps predict whether the person — either man or woman — has the ability to meet the difficult physical demands of the combat jobs. The services plan to conduct regular review and collect injury data that will help guide training and other changes that might be needed.