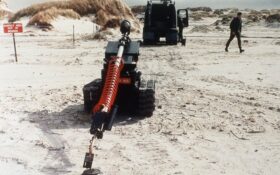 Britain’s Foreign Office says the Falklands will soon be landmine free – almost 40 years after the 1982 conflict between the United Kingdom and Argentina in the South Atlantic islands.

A U.K.-funded mine clearing program that started in 2009 is set to end three years ahead of schedule. With the completion of the program, no anti-personnel mines will remain on British soil.

“Our commitment to ridding the world of fatal land mines does not end with our territories being mine free.” said Wendy Morton, the U.K. minister responsible for the Falklands. “A further 36 million pounds ($47.6 million) of U.K. funding will allow demining projects across the world to continue, protecting innocent civilian lives.”

People on the Falklands will detonate the final mine in a ceremony on Nov. 14 that will also include cutting down fences to reopen access to beaches.

Argentina lost the war for the South Atlantic archipelago after its troops embarked on an ill-fated invasion. The conflict claimed the lives of 649 Argentines and 255 British soldiers.

Argentina still claims the islands, which it calls the Malvinas. Britain says the Falklands are a self-governing entity under its protection.