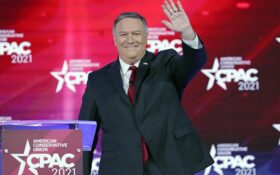 However, he has usually remained silent about personal matters, like his family life.

Then, on Sunday, he made a rare announcement.

The former state secretary tweeted that his son, Nick, had married his longtime fiancee Rachael Zeller on Saturday.

Prior to Sunday, the couple had been planning the wedding for more than a year.

Nick first announced his engagement through Twitter in December 2020.

Yesterday, we watched our son, Nick, marry the love of his life, Rachael. What a spectacular day celebrating our favorite couple.

Mom and I love you both so much. May God bless you with a lifetime of love and happiness! pic.twitter.com/2GYmYGkF9q

She said YES! Easily the best day of my life. I love you, Rachael ❤️ pic.twitter.com/yEbcZJ0B21

Nick , a private equity professional, is Pompeo’s only child. According to a profile in The New Yorker, he is the biological son of Pompeo’s second wife, and he was formally adopted by Pompeo in the year 2000.

Like his father, Nick protects his personal privacy. He’s put restrictions on some channels of social media, and he tweets only sparingly. He hasn’t tweeted since June 19.

By contrast, Mike Pompeo has been making headlines this month. He was sanctioned by the Iran on Saturday amid President Joe Biden’s visit to the Middle East.

Pompeo is also preparing to release a book about his years in the Trump administration. According to his publisher, he will offer “unvarnished appraisals of the deals made and characters encountered along the way.”

Most notably, Pompeo has apparently been hinting at a run for president in 2024. As of April, he’s made several visits to Iowa, home of the first caucus in the presidential primaries.

Nick last made headlines in 2020 amid a congressional investigation about the misuse of State Department resources for personal errands.