Mike Pence: We will further explore space - The Horn News 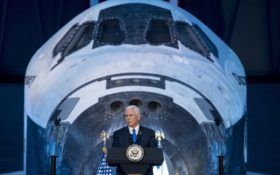 Trump administration officials are pledging to send Americans back to the moon — and then on to Mars.

Space industry leaders say they and NASA are building the spaceships to get there. And they’re promising that in five years, astronauts could be working around the moon — but not quite land there yet.

Here’s what Vice President Mike Pence is saying: “We will return American astronauts to the moon, not only to leave behind footprints and flags, but to build the foundations we need to send Americans to Mars and beyond.”

But few details, such as cost, are being mentioned in the space visions outlined at the first meeting of the revived National Space Council since it was disbanded in 1993.