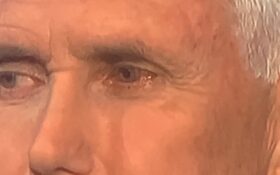 For American voters who watched Wednesday’s debate between Vice President Mike Pence and Sen. Kamala Harris, D-Calif., there was one moment that surprised them.

It wasn’t the strange fly, either.

It was Pence’s left eye, which was bloodshot.

It had critics buzzing with concern — and liberal commentators pounced.

What is going on with Pence’s Left Eye? When he looks to his right, the outside of his left eye is conspicuously red. pic.twitter.com/tZAdhoomzR

Perhaps the most outlandish claim was that Pence was suffering from COVID-19, as pink eye can be a symptom in “11 to 30 percent” of infected patients according to what Dr. Jennifer Ashton told ABC News.

” … but he also could have just had some makeup in his eye,” she also said.

[Sponsored] How to feel better

Before the debate, both the vice president and wife Karen tested negative for the virus.

It’s also worth mentioning that a very similar event occurred with former Vice President Joe Biden during a September 2019 debate. Biden had a blood vessel burst in his eye.

But the mainstream media was largely silent about it and the event passed without another peep.

Uh, hey guys. Joe Biden’s eye filled with blood while onstage at the CNN town hall.
This is not a photoshop: pic.twitter.com/kJRHxMP8wc