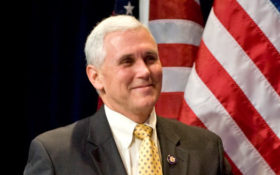 Vice President Mike Pence unloaded on The New York Times this weekend — and President Donald Trump took to Twitter to get his vice president’s back.

After an allegedly faked Times report that Pence was positioning himself to run against Trump in the next election, the vice president responded on Sunday:

“Today’s article in The New York Times is disgraceful and offensive to me, my family and our entire team,” the vice president’s statement read. “The allegations in this article are categorically false and represent just the latest attempt by the media to divide this administration.”

“Whatever fake news may come our way, my entire team will continue to focus all our efforts to advance the president’s agenda and see him re-elected in 2020. Any suggestion otherwise is both laughable and absurd,” Pence added.

Trump rushed to Pence’s support and insisted the administration’s support is stronger than ever, despite the controversial report that Republicans are weighing a 2020 presidential run without him.

In a flurry of early morning tweets Monday, Trump said —

The Trump base is far bigger & stronger than ever before (despite some phony Fake News polling). Look at rallies in Penn, Iowa, Ohio…….

… Supreme Court pick, economic enthusiasm, deregulation & so much more have driven the Trump base even closer together. Will never change!