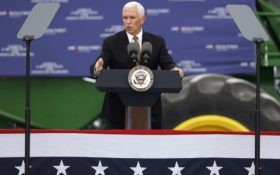 After the election fallout, the Jan. 6. Capitol storming and President Joe Biden’s inauguration, Pence had shied away from the limelight amid the political flux.

But Wednesday he finally spoke out about the election and the way it all went down.

In a Daily Signal op-ed, Pence shared his thoughts on allegations of election fraud in the November contest.

It come weeks after President Donald Trump supporters urged the former Vice President to contest the results of the Electoral College in the congressional chamber before Biden was certified the winner.

Now, Pence is claiming that “numerous instances of officials setting aside state election law” transpired in the wake of the election.

The remarks are somewhat timely.

They come as Democrats are threatening to pass a massive election reform bill that would dramatically alter U.S. voting as we know it.

According to The Hill, the proposal introduced by Democrats could expand mail-in vote laws and give the federal government the right to regulate voting procedure, among other voter-related statutes.

Pence fears the 1st Amendment will be trampled should the bill pass.

It will “further erode confidence in our elections, and forever dilute the votes of legally qualified eligible voters,” according to Pence.

And the way he sees it, Democrats are simply using this bill to jam through partisan agendas.

“While legislators in many states have begun work on election reform to restore public confidence in state elections, unfortunately, congressional Democrats have chosen to sweep those valid concerns and reforms aside and to push forward a brazen attempt to nationalize elections in blatant disregard of the U.S. Constitution,” Pence writes.

As for the bill itself, reports say that it will be debated next week on Capitol Hill.

For Pence, however, critics note the strange timing after he had a chance to speak up at the time when lawmakers were debating the results of the Electoral College.

He said nothing then, a decision that dismayed Trump’s most loyal supporters, some of whom remain convinced — despite losing numerous court cases — that there was widespread voter fraud.

Some seem to think that Pence is priming another political run and the op-ed was an attempt to try courting Trump voters again.

“We’re all watching,” one user wrote on Twitter. “And we won’t forget.”

We're all watching, and we won't forget. pic.twitter.com/TIqP0eMVkh

It seems that more than an op-ed may be in order.