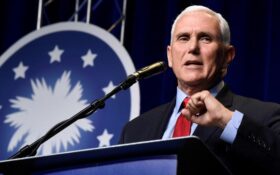 Former Vice President Mike Pence and some establishment Republican Party allies attacked former President Donald Trump on Monday for dining with a Holocaust-denying white nationalist and the rapper formerly known as Kanye West days after launching his third campaign for the White House.

Pence, in an interview, called on Trump to apologize and said the former president had “demonstrated profoundly poor judgment” when he met last week at his Mar-a-Lago club with West, who is now known as Ye, as well as Nick Fuentes, a far-right activist with a long history of espousing antisemitic and white nationalist views.

The episode is serving as an early test of whether party leaders will continue to rally behind Trump as he embarks on yet another campaign for the White House.

Trump fired back at criticism on his media platform TruthSocial.

“Ye, formerly known as Kanye West, was asking me for advice concerning some of his difficulties, in particular having to do with his business. We also discussed, to a lesser extent, politics, where I told him he should definitely not run for President, ‘any voters you may have should vote for TRUMP.’ Anyway, we got along great, he expressed no anti-Semitism, & I appreciated all of the nice things he said about me on ‘Tucker Carlson.’ Why wouldn’t I agree to meet? Also, I didn’t know Nick Fuentes.”

Pence is largely expected to challenge Trump for the 2024 Republican presidential nomination, but the attack is his biggest break yet from the former president.

“President Trump was wrong to give a white nationalist, an antisemite and Holocaust denier, a seat at the table and I think he should apologize for it. And he should denounce those individuals and their hateful rhetoric without qualification,” Pence said in an interview with NewsNation’s Leland Vittert that aired Monday night.

Still, Pence said he does not believe Trump is antisemitic or racist and said he would not have served as Trump’s vice president if he was.

Some, like Sen. Thom Tillis, R-N.C., blamed Trump’s staff for allowing Fuentes to join the dinner.

“If he wasn’t familiar with him, then whoever had responsibility for knowing the backgrounds of the people in the room, I hope they are already fired,” Tillis told reporters at the Capitol Monday evening.

When asked if Trump should apologize, he said, “I’ll leave that to President Trump.”

Still others were less equivocal.

“President Trump hosting racist antisemites for dinner encourages other racist antisemites. These attitudes are immoral and should not be entertained. This is not the Republican Party,” tweeted Sen. Bill Cassidy, R-La.

Others were dismissive of media criticism. South Carolina Sen. Lindsey Graham, a longtime Trump ally, said: “Yeah, the meeting was bad. He shouldn’t have done it.”

But he added that “there’s a double standard about this kind of stuff and I don’t think it will matter in terms of his political future.”

The Horn editorial and the Associated Press contributed to this article