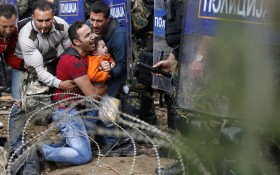 Migrants fleeing ISIS are causing chaos all around Europe.  Rumors of riots and assaults have caused some countries to shut down their rail stations, and the crisis is quickly becoming overwhelming.

Hungary’s leader railed Thursday at Germany and EU leaders for lacking urgency in dealing with Europe’s migrant crisis as chaos reigned back home, where migrants by the thousands surged into Budapest’s main train station after police ended their two-day blockade of its entrance.

In a swirl of confusion, excited migrants piled into a newly arrived train at Keleti in the Hungarian capital despite announcements in Hungarian and English that all services from the station to Western Europe had been canceled. A statement on the main departures board said no more trains to Austria or Germany would depart “due to safety reasons until further notice!”

Many migrants, who couldn’t understand either language and were receiving no advice from Hungarian officials, piled aboard in a standing-room-only crush and hoped for the best. Instead, the train soon stopped northwest of Budapest in the town of Bicske, where dozens of riot police stood waiting to escort the human cargo to one of the country’s major camps for asylum seekers — an overcrowded, open-door facility that many of the migrants already had left days before.

Disappointed migrants started chanting “No camp!” in Arabic, some tried to flee on foot down the tracks, and one family sat down beside the tracks and appealed to journalists for help. When police told the media to move off the tracks and the family to move inside, the husband in apparent desperation lost emotional control. He threw his own wife and infant child onto the tracks, sat down beside them and started hitting himself in the head as he bemoaned Hungary’s unwillingness to let them travel west.

Police in helmets and body armor surrounded the prone family and lifted the man off of his wife and child. Officers handcuffed him as he whimpered, his chest down on the pavement, and carried him away. The woman and infant were escorted off the tracks but not detained.

Other migrants scuffled with police and forced their way back on to the train’s carriages, where an hours-long standoff in the sweltering sun began. Police delivered water to the migrants, but many tossed the bottles back, expressing fears that police might have drugged the water and wanted to sedate them.

The question of how to defuse the human gridlock in Hungary was being hotly debated Thursday in Brussels at a meeting between European Union leaders and Hungary’s anti-immigrant prime minister, Viktor Orban. Hungary, which for months had done little to prevent asylum applicants from heading west, now says it won’t let more migrants deeper into Europe.

“We Hungarians are full of fear. People in Europe are full of fear, because we see that European leaders, among them the prime ministers, are not capable of controlling the situation,” Orban said.

Orban said Hungary’s problem with migrants was really “a German problem. Nobody would like to stay in Hungary. All of them would like to go to Germany.”

He vowed that Hungary would defend its borders by fingerprinting, photographing and screening all migrants that cross into its territory. Once the proposed measures are passed in parliament, he said, migrants and smugglers alike would be warned of what was to come.

Lazar urged Germany to help ease the situation at the Keleti train station, where an estimated 3,000 people have camped for days. Conditions have grown increasingly squalid despite the efforts of volunteers distributing water, food, medicine and disinfectants.

On Thursday, an AP reporter saw one infant boy beside his sleeping parents crawling onto the pavement to eat breadcrumbs from the floor. Nearby, an unattended toddler walked to a pile of garbage, picking at discarded wrappers in search of candy.

“We would like Germany, where the migrants want to go, to pull its own weight,” Lazar said, suggesting the migrants go to the German Embassy in Budapest and apply for a German entry visa.

“We believe this is primarily an immigration crisis, not a refugee crisis, and in this situation Europe can’t renounce defending its borders,” Lazar told reporters in Parliament.

On Wednesday, migrants had threatened to walk the 105 miles (170 kilometers) to the Austrian border if police wouldn’t let them board trains to their desired destinations in Austria and Germany.