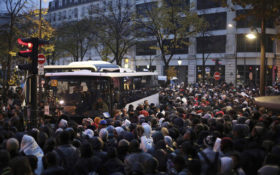 Police and city officials are clearing out up to 3,000 migrants from Sudan, Ethiopia and other countries who have been gathered on Paris sidewalks in a camp that recently mushroomed into a new challenge for the French government.

Migrants boarded a few dozen buses en route to temporary shelters where they can apply for asylum. The operation began before dawn Friday and has been largely calm. Riot police in body armor and shields are ringing the neighborhood around the canals of northeastern Paris.

While authorities regularly evacuate migrants camped in Paris, the issue has taken on greater concern since the French government shut down a vast camp in Calais last week and moved its thousands of residents to temporary reception centers across the country.

Some of the Calais migrants fled to Paris, joining others living in the Paris tent camp who had arrived here from Italy after dangerous crossings from the Mideast and Africa.

“This is the biggest operation sheltering migrants we have had to face in the last 18 months,” said Christine Gauthier of the Paris region’s housing department. The migrants will first be taken to temporary shelters in the Paris region, then transferred to other centers elsewhere in France while their asylum requests are processed.

A City Hall official said about 150 migrants were identified as “vulnerable,” including women and children and the ailing, and they were given special care. The official said authorities brought enough buses for 3,000 migrants overall, though the exact number living in the camp is unclear.

“I don’t know where we are going,” said Odam Husein, a 23-year-old from southern Sudan with a small plastic bag of belongings, as he waited to board a bus. Like many of the migrants around him, Husein said he’s afraid of routine police raids, tired of sleeping on the street, and confused about whether he has the right to asylum in France.

President Francois Hollande vowed to clear out the Paris camp, saying France can no longer accept such migrant settlements. But it’s unclear whether the government can prevent new camps from surfacing in Paris or Calais, especially as Europe’s migrant crisis persists.

Regional authorities say they have cleared out more than 19,000 migrants from Paris since June 2015.