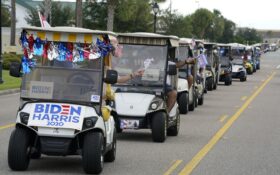 The city of Omaha has seen eight golf carts worth more than $50,000 stolen from two of its public golf courses in recent weeks, mirroring a trend seen across the country.

City golf manager Bob Baber said the carts were parked outside and tethered with security cables when they were stolen in the middle of the night. The carts are valued at about $6,300 each.

Bader said the city is adding security measures and looking to increase the size of storage sheds so all of its golf carts can be locked inside at night.

Caleb Amundson, a founding partner at Golf Cart Resource in Scottsdale, Arizona, said his company estimates that 25,000 golf carts are stolen every year in the U.S. Thieves can make between $3,000 and $6,000 selling stolen carts in neighboring states, he said.

“It’s a pretty easy way to turn a profit,” Amundson said. “They take the golf carts to another state, make some changes to wheels, body or seat, and you have a custom golf cart to sell.”