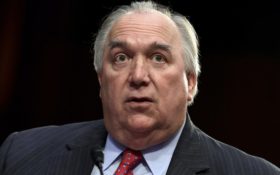 The Latest on the resignation of interim Michigan State University President John Engler (all times local):

The Board of Trustees voted Thursday to make the resignation immediate. Trustee Kelly Tebay says “a wrong has been righted today. I’m sorry it took so long.”

The former Michigan governor was brought in to help the university following the Nassar scandal. Engler had resisted past calls to step down. But the final straw came last week when he said Nassar’s victims had been in the “spotlight” and were at times “still enjoying … the awards and recognition.”

Hundreds of women and girls have accused Nassar of molesting them when they sought treatment during his time working for Michigan State and USA Gymnastics. The victims included Olympic gymnasts.

Michigan State University’s Board of Trustees has voted to accept interim president John Engler’s resignation, but is making his departure effective immediately.

The board acted Thursday, a day after Engler said he’d step down next week . Engler’s resignation comes amid fallout from remarks he made about some victims of former sports doctor and convicted sexual abuser Larry Nassar.

The board appointed Satish Udpa as the new interim president. He currently serves as the school’s executive vice president for administration and is a distinguished professor.

Michigan State University plans to announce a new interim president following the forced resignation of John Engler amid backlash over his comments about some of convicted sex abuser Larry Nassar’s victims.

The Board of Trustees will meet Thursday. The former Michigan governor, who was brought in almost a year ago to help the school recover from the scandal, announced his resignation Wednesday rather than be fired at the meeting. It’s effective Jan. 23.

Engler told The Detroit News last week that Nassar’s victims in the “spotlight” are “still enjoying that moment at times, you know, the awards and recognition.” Engler previously was criticized for sending emails that suggested the first woman to go public with her accusations was probably getting a “kickback” from her attorney.

The university plans to name a permanent president in June.