Michelle Obama to challenge Biden in 2024!? - The Horn News 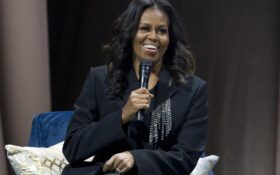 A recent interview has speculators wondering if former first lady Michelle Obama is be gearing up for a 2024 presidential run to counter former President Donald Trump.

While President Joe Biden has repeatedly said he’ll be running for re-election, he could barely squeak out a win against Trump in 2020 and is increasingly unpopular among the voting public.

Facing the potential re-election of Trump — or the possibility of eight years of Gov. Ron DeSantis, R-F.L., in the White House — speculation has swirled that Michelle could be gearing up for a presidential run.

Notably, in a recent interview with ABC News the former first lady declined to back Biden’s potential re-election campaign.

“I — will have to see. The reason I don’t speak on that is because I know what it feels like to be on the other side of it, and I think that that’s a personal decision that he and his family have to make,” she told ABC News’ Robin Roberts on Sunday.

“Probably, if I hadn’t been through it, I’d feel more cavalier about opining on it, but I know it’s a personal call, and I don’t want to be one of the millions of people weighing in on what he should do, he and Jill should do,” she said.

In the cutthroat world of Washington, D.C. politics, declining to back a party leader so publicly is not a small slip-up.

Michelle Obama running for national office is something that has worried Republican Party officials and conservative activists for years because she has remained largely untainted by Democratic Party woes in the public’s eye.

If Democrats “were to run Michelle Obama, that would put us in a very difficult position because they’d reach for a candidate who is completely plausible, very popular, and immune to criticism,” Monica Crowley, a former treasury spokeswoman, told the Conservative Political Action Conference (CPAC) in 2020.

Also, when you think about her positioning, she was a keynote speaker [at the Democrat National Convention] in 2020, she wrote her autobiography and did a 50-city tour, she has massive Netflix and Spotify deals, and she’s got a voting rights group alongside Stacey Abrams,” Crowley warned.

The former first lady consistently ranks among the most popular public figures in the United States, numerous recent YouGovAmerica polls have reported.

Over the years, numerous other polls have said that Michelle Obama’s favorability ratings are consistently high.

And according to a recent Hill-HarrisX poll, Michelle Obama ranks as the second favorite among Democratic Party voters if President Joe Biden decides not to run for re-election.

Michelle Obama denied having presidential ambition in a recent interview, and said she “detests” being asked if she’ll run for office.

But will her tune change when Biden is facing a potential defeat in the 2024 presidential election?