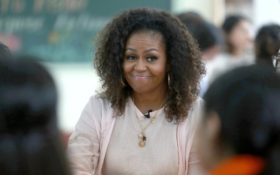 Former First Lady Michelle Obama has been promoting her new book called The Light We Carry: Overcoming in Uncertain Times.

In order to push sales, the former first lady has pursued an unlikely strategy: using interviews to discuss her resentment towards her husband, former President Barack Obama.

“There were 10 years where I couldn’t stand my husband,” the former first lady admitted on television. “People think I’m being catty by saying this.”

“Guess when it happened,” she continued. “When those kids were little, right?”

“You can be all great individually when you’re just married. You’ve got your life. He’s got his. You come together. It’s all, ‘Oh! Good to see you! Bye! Take it easy!… You’re traveling? That’s great! Good! I get to hang out, watch the T.V. I want to watch,'” the former first lady said. “But the minute we had kids, it was like, ‘Where’re you going and how far?'”

She gestured at her watch, amid laughter from the other panelists.

“You start measuring. It’s like, ‘How many diapers did you change? Oh, you’re golfing? You have time. You’ve got time to golf. Why’re you at the gym all the time?’ That’s when all the measuring starts because you’ve got this project,” Obama said, referring to her children.

“Little kids, they’re terrorists. They are. They have demands. They don’t talk. They’re poor communicators. They cry all the time. They’re irrational. They’re selfish, and you love them more then anything. And so you can’t blame them,” the former first lady said.

One panelist asked Obama, “How do you know?”

“You’ve got to know your person. Do you like him? I mean, you could be mad at him, but do you still look at him and go, ‘I’m not happy with you, but I respect you. I don’t agree with you, but you’re still a kind, smart person.’ The feelings are going to change over time,” the former first lady responded. “The minute [the honeymoon phase] goes, people want to give up on it. But now you’re in the work. You’re in the work of it. And so that’s why I want to talk about the work of it, the work of any relationship.”

Michelle Obama shares the Real about Marriage and MotherHood🍵 pic.twitter.com/4eJvWB8Olg

The former first lady made these remarks on the cable channel Revolt, during a panel moderated by radio host Angie Martinez. She was speaking alongside four other panelists: musician Kelly Rowland, recording artist H.E.R., businesswoman Tina Knowles-Lawson and model-activist Winnie Harlow.

Known as an especially active first lady, Obama has cashed in on business ventures with her husband since leaving the White House. In 2018, she co-founded the production company Higher Ground with the former president. The following year, the company produced the Oscar-nominated documentary American Factory.