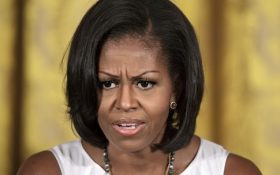 In an interview with CBS News’ Gayle King on Saturday, Michelle Obama got personal about her sex life… and what she said blew everyone away.

But that wasn’t the most controversial piece of the interview. What came next shocked everyone.

Early in the interview in front of a friendly crowd at the Essence Festival on Saturday, King pressed the former first lady about her intimate life with former President Barack Obama — and Michelle indulged the crowd at with some juicy gossip about her “active” sex life.

“Yes, I support that principle. I mean come on, Gayle… yes!” Obama dished to a cheering crowd.

“What are you supposed to say to that?” Obama asked rhetorically. “’No, I take issue with great sex at every age?’ No!”

Critics called the interview a disgrace after King went on to field softball questions — and began agreeing with Michelle’s political opinions on-stage.

King later asked Michelle about her thoughts watching President Donald Trump be elected and inaugurated in 2016.

“To sit at his inauguration and to look around at a crowd that was not reflective of the country… it was just such the opposite of…” Michelle said, “During Barack’s inauguration, we made sure that the crowd looked like all of America.”

“I had to sit in that audience, one of the handfuls of people of color and listen to that speech. All that I had held onto for eight years, watching my husband be raked over the coals, feeling like we had to do everything perfectly — no scandals, no nothin’ ya’ll!” Michelle said to a cheering crowd.

“We had to show up perfectly — even better than perfect, to be even considered equal,” Michelle continued.

CBS News’ top star agreed with her interviewee (a journalist “no-no”) and repeated that there were “no scandals” that happened under Obama. She also agreed with Michelle that the media was especially hard on the Democrats, and not on Trump.

Conservative pundits were quick to criticize King being assigned such a high profile interview by CBS despite being a personal friend of the Obama family. King has vacationed with the former First Family on two separate occasions, including once being invited aboard their private yacht.

Critics pounced after the interview.

“The former first lady is not the problem in this story. Michelle Obama is free to believe whatever lunacy she pleases. First ladies have been into far, far weirder things. The real issue here is the journalist who not only allowed a bald-faced lie to go unchecked, but actually agreed with her interviewee!” The Washington Examiner’s Becket Adams noted.

“The Obama administration is book-ended by scandal. King knows this,” Adams wrote on Monday. “The eight-year Obama era opened with a voter intimidation scandal and ended with a Russian election interference scandal.”

You can watch the controversial segment here —

Here is @MichelleObama claiming that the media were so rough on the Obama Administration, they had to be "better than perfect," with "no scandals."