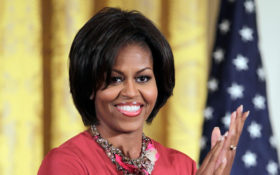 Michelle Obama said she struggled with a “crushing sense of hopelessness” after the 2020 presidential election that was brought on by the death and isolation of the COVID-19 pandemic, a summer of political and racial unrest and the riot at the U.S. Capitol.

“Everyone was searching for some answers of how to cope. And for some reason they were asking me, ‘What do you do?’ I had to start thinking about that,” the former first lady told People magazine in an interview pegged to Tuesday’s release of her second book, “The Light We Carry: Overcoming in Uncertain Times.” She is set to open a six-city book tour in Washington on that day.

In the book, former President Barack Obama’s wife, who is one of the world’s most famous women, tells how she steadies herself during these anxious times and how she works at overcoming her lifelong fear of change and doubts about herself.

“Over the 58 years that I’ve lived, I can look back and I can say, ‘This is how I deal with fear. These are the things I say to myself when I need to pick myself up. This is how I stay visible in a world that doesn’t necessarily see a tall Black woman,’” she said. “This is how I stay armored up when I’m attacked. The book is that offering.”

“I think people learn not through edict, but through stories,” she said. People posted a report on the interview on its website on Thursday, and it will appear in the magazine’s Nov. 21 issue, available nationwide on Friday.

Mrs. Obama, the mother of Sasha and Malia Obama, opens up in the book about everything from how awkward it is to make new friends to her experiences with racism, marriage, parenting and even menopause.

She also writes about leaning on a “kitchen table” of close girlfriends, led by her 85-year-old mother, Marian Robinson. The group includes Kathleen Buhle, a hiking and yoga pal who is the ex-wife of President Joe Biden’s son Hunter and the mother of Maisy Biden, Sasha Obama’s best friend.

In 2018, Mrs. Obama released her best-selling memoir, “Becoming,” and embarked on a U.S. and international book tour to promote it. The book has sold more than 17 million copies worldwide, surpassing the sales of any memoir by a previous first lady or modern president, including her husband.

In her new book, the former first lady describes looking in the mirror and only seeing her flaws, and how she practices being kind to herself.

She said she also copes by indulging in what her husband calls “lowbrow TV.”

“You name it, I watch it,” she said, naming HGTV, anything on the Food Channel and dating shows like “Married at First Sight” among her viewing choices.

The former first lady described herself as an informed citizen who reads the newspaper, gets briefs, sits with her husband every night and knows what’s happening in the world.

But she said that “when I’m by myself, I need to be able to turn my head off and think about wallpaper.”