Michael Moore: The world is going to end! - The Horn News 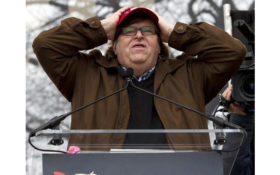 The liberal meltdown over President Donald Trump is going nuclear — and filmmaker Michael Moore is starring as their leftist prophet of doom.

Moore is in a full-blown panic; he’s absolutely freaking out about Trump’s regulatory cuts, which are aimed to free businesses from unfair rules and help them bring jobs back to America.

According to Moore, Trump is going to bring about the end of the world.

Moore tweeted Tuesday that the end times were upon us —

Historians in the near future will mark today, March 28, 2017, as the day the extinction of human life on earth began, thanks 2 Donald Trump

And future human historians (somehow, in Moore’s crazy prediction, historians inexplicably survive a mass extension) will mark Tuesday as the beginning of the end.

The internet went ballistic — and conservatives destroyed Moore’s freak out on social media.

That is just silly. The UN says global warming killed us all 17 years ago @MMFlint https://t.co/QE56vpUTfZ pic.twitter.com/1HvQDrc2oh