Michael Moore: I will end Trump - The Horn News 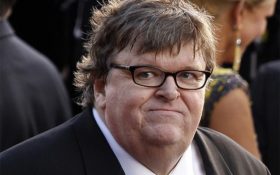 Notoriously liberal filmmaker Michael Moore has just announced that he is the man Democrats have been searching for to bring an end to Donald Trump’s presidency.

And how is he going to destroy one of the most powerful people in the world?

No, that’s not a joke… at least, it’s not supposed to be!

Moore declared Tuesday that his upcoming film “Fareheit 11/9” — named for the day Trump was named president-elect — will have a major effect on the history of the world.

“No matter what you throw at him, it hasn’t worked,” Moore said in a statement.”No matter what is revealed, he remains standing. Facts, reality, brains cannot defeat him. Even when he commits a self-inflicted wound, he gets up the next morning and keeps going and tweeting.”

“That all ends with this movie,” Moore said.

While there is not yet a release date, the rights to the film have already been purchased by Bob and Harvey Weinstein, the same men who executive produced Moore’s popular Farenheit 9/11 documentary, which analyzed the effects of the September 11th, 2001 terrorist attacks.

There isn’t much known about the upcoming film, other than it will focus on Trump and his rise to the presidency with a “storyline unlike any that is currently being told,” according to the Weinsteins.

But this isn’t Moore’s first desperate attempt at bringing down Trump.

He put on a pro-Hillary Clinton one-man show on Broadway titled, “The Terms of my Surrender” with the tagline, “Can a Broadway show bring down a sitting president?”

When it became clear the answer to that question was “No,” Moore took it a step further and released “Michael Moore in TrumpLand,” a documentary based on his Broadway show.

Again, no luck taking down the president.

With these two failures under his belt, Moore is hoping third time’s a charm.

But Trump supporters everywhere are begging, no Moore!