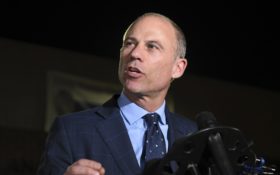 Michael Avenatti’s recorded threats to reduce the value of Nike’s stock if he wasn’t paid millions of dollars highlighted a prosecutor’s closing argument Tuesday at the prominent lawyer’s extortion trial.

On the tape, Avenatti could be heard threatening to take $5 billion or $6 billion off the value of Nike’s stock if his demands were not met.

When the prosecutor spoke, he told jurors: “That is what extortion sounds like.”

Prosecutors say Avenatti threatened to use his fame to stage a news conference and deliver proof that Nike executives were corrupting college basketball by funding payments to elite young players and their families unless he was paid $25 million to conduct an internal probe of the apparel giant.

At the time, prosecutors say, Avenatti faced at least $11 million in debts. His former law firm office manager testified that finances were so desperate last March that his several employees had been evicted from their $50,000-a-month offices and were working from their homes.

Defense lawyers say the government was trying to criminalize the kinds of negotiations that lawyers engage in every day when they aggressively represent clients. They were expected to offer closing arguments of their own later Tuesday on behalf of Avenatti, who has pleaded not guilty.

In his closing, Podolsky repeatedly played recorded conversations he said prove that Avenatti was working for his own benefit in his dealings with Nike, rather than for the benefit of his client, Gary Franklin, a Los Angeles amateur basketball coach.

“Michael Avenatti, facing a mountain of debt, saw light at the end of the tunnel,” Podolsky said. “He saw a meal ticket: Gary Franklin.”

Franklin testified last week that he hoped that a high-profile lawyer like Avenatti would restore a decade-long sponsorship relationship between his amateur league and Nike after he got the company to punish two executives who demanded he play a role in payments to athletes’ families.

The prosecutor added: “The evidence is clear. It is simple. The defendant used Gary Franklin’s information to get something for himself.”

Podolsky said Avenatti did not tell Franklin he was demanding to be allowed to conduct an internal probe of Nike for at least $15 million before he would agree to settle Franklin’s claims.

On one recorded conversation played for jurors, Avenatti could be heard telling Nike lawyers: “A few million dollars doesn’t move the needle for me. I’ll go take $10 billion dollars off your market cap.”