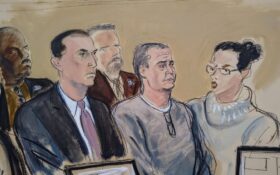 Garcia Luna is pending trial in New York on charges he conspired to traffic cocaine and made false statements. On Thursday, a superseding indictment charged him with continuing criminal enterprise. Cardenas Palomino and Pequeno Garcia have not been arrested, prosecutors said.

“Through today’s superseding indictment, Garcia Luna and his co-conspirators will face justice for offenses involving the importation and the distribution of massive quantities of dangerous drugs into the United States,” said Seth D. DuCharme, Acting United States Attorney for the Eastern District of New York.

Garcia Luna denies the charges and says he intends to fight them at his New York City trial. His defense attorney, Cesar de Castro, has said the case is built upon the discredited — and self-serving — accounts of drug traffickers.

Garcia Luna is accused of accepting tens of millions of dollars in bribes — often stuffed in briefcases full of cash — to shield the Sinaloa cartel from law enforcement.

Guzman was sentenced to life in prison last year after a jury convicted him in a massive drug conspiracy involving murder and mayhem.