Message in a bottle? Cosmonauts release Earth videos into space - The Horn News 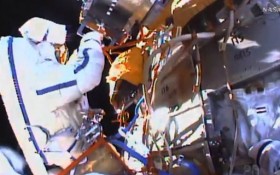 Spacewalking Russians gathered seeds and spores that have been stuck outside the International Space Station for months if not years and gave a ceremonial send-off Wednesday to a flash drive containing special messages for their motherland.

The flash drive includes videos and messages pertaining to the 70th anniversary of Russia’s Victory Day last year. It was attached to a small bundle stuffed with towels to provide some bulk.

“There it goes,” Volkov said in Russian as he let go of the package with his right gloved hand. “Just beautiful,” he noted as it spun slowly, appearing to tumble toward Earth. Spacewalking partner Yuri Malenchenko floated nearby.

The job was added just a few days ago. NASA said the jettisoned package would pose no hazard to the orbiting lab. Flight controllers expect the bundle to harmlessly re-enter the atmosphere in a few weeks.

With that accomplished, the spacewalkers set off to retrieve research equipment that has been outdoors since 2009. The trays include plant seeds as well as spores from fungi and bacteria; the specimens typically were replenished every year or two and returned to Earth for analysis. The cosmonauts set out fresh experiments elsewhere on the space station, then found themselves fussing over a dispenser in a surface- coating experiment.

The roll of tapelike film in the dispenser kept jamming, frustrating Malenchenko and Volkov as they tried to coat an outdoor sample board. Only one attempt appeared to succeed.

“It glued on so nicely. It’s like a perfect sticker,” one of the spacewalkers reported. “Are we done?” They weren’t, but Russian Mission Control advised them a few minutes later to wrap it up and head back in.

The Jan. 15 spacewalk had to be cut short because of the problem, a repeat of what happened to an Italian spacewalker in 2013. That first incident was considerably more serious, involving much more leakage.

The Russians use different types of suits, which functioned well Wednesday. As for U.S. spacewalks, astronauts will go out only in an emergency until the leakage is understood and corrected, according to NASA.