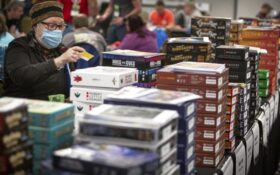 Makers of board games are seeking the smarty seal of approval at a round-the-clock event this weekend.

The 2022 American Mensa Mind Games are underway at hotel in South Portland, Maine, where hundreds of intellectually gifted individuals are getting a crack at new board games during a three-day event.

Out of 65 games submitted for evaluation, five will be chosen for the “Mensa Select” seal of approval, the Bangor Daily News reported. Past winners include Scattergories, Trivial Pursuit and Taboo.

For participants, it’s all about intellectual stimulation and fun.

“I’ve been looking forward to this for three years,” Kimberly Kohler, of Illinois, told the Daily News. “My goal is to absolutely forget about the rest of the world for a few days and just play board games.”

Mark Grand, of Georgia, called the event the “perfect vacation” even though he doesn’t plan to leave the hotel. “I’m here for the games,” he said. “I’ll eat lobster and see the sights some other time.”

Mensa is a social club with members who have IQs in the top 2% of the public, as judged by accepted tests. The group has more than 50,000 members in the U.S.

But they aren’t all nerds geeking out on quantum physics.

It’s a diverse mix of people, she said, that makes Mind Games so much fun.

“Even for those of us who do not play games at this level,” she said, “it is a wonderful opportunity to see friends.”