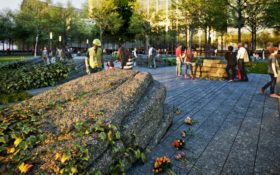 A pathway flanked by six stones meant to symbolize strength and determination will be added to the Sept. 11 memorial site in lower Manhattan to honor the rescue and recovery workers who toiled for months at ground zero, officials announced Wednesday in unveiling the design concept.

The new dedicated area will also serve as a way to honor those who became sick or died from exposure to the toxins in the environment after the twin towers fell.

“Hundreds of thousands of people are estimated to have been exposed to toxins at the World Trade Center site, both on the day of 9/11 and during the months of recovery operations that followed,” Alice Greenwald, president and CEO of the National Sept. 11 Memorial & Museum, said in a statement.

She added, “By integrating this meaningful public space at the memorial, we seek to recognize all those for whom 9/11 has remained an all-too-present reality.”

The announcement was on the day of the memorial and museum’s annual commemoration of the rescue and recovery effort, which officially ended on May 30, 2002.

The idea for the space had been announced last year, with officials joined by former “The Daily Show” host Jon Stewart, a board member of the museum who has been an outspoken advocate for the Zadroga Act, which provides health benefits to first responders who fell ill after the attacks.

He said in his statement: “These men and women sacrificed themselves for the rest of us and have spent years suffering and dying because of it. We have long owed it to them to honor their contributions. It’s also important for us to recognize the folks who have died or are suffering who were exposed to World Trade Center toxins while working in lower Manhattan or called the community their home.”

The new space was designed by Michael Arad and Peter Walker, the men who came up with the concept for the reflecting pools and surrounding trees that make up the Sept. 11 memorial and plaza.

The pathway on the southwest corner of the plaza will loosely be in the area of the ramp that was used to remove material from the site during the grueling nine-month effort to clear it. It will end near the Survivor Tree, a Callery pear tree that was severely damaged in the attack but nursed back to health and replanted at the site.

The six stones will be placed alongside the pathway, pointing upward. In his design statement, Arad said, “these stones are rough and worn, and their angle suggests a forceful resistance, an answer to the violence that brought them forth.”

The plan for the area also includes incorporating a text inscription to go along with the stones that will include steel from the original World Trade Center that visitors will be able to touch.