Memorial Day photo that every American should see (going viral!) - The Horn News 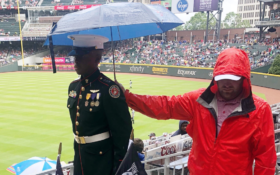 The Atlanta Braves shared a moving image on Memorial Day with the caption “respect” — and it has since gone viral.

On Monday, a Junior ROTC member stood at attention as an honor guard for a chair dedicated to servicemen and women unaccounted for since World War I.

The Braves shared a photo that did not capture the game, but instead a random act of kindness from a man dressed in a raincoat holding an umbrella over the head of a the cadet standing in the rain.

The image was taken during the third inning when the game paused to recognize the POW-MIA Chair of Honor.

The chair stays permanently empty and has a plaque that details, “Since World War I, more than 92,000 American soldiers are unaccounted for. This unoccupied seat is dedicated to the memory of these brave men and woman and to the sacrifices made in serving this country.”

A Parkview High School U.S. Marine Corps JROTC member was called to stand at the game during Monday’s game, and reportedly seemed unbothered by the rain.

That did not stop one fan wearing a red raincoat from standing up to keep the cadet dry.

Another Braves’ fan shared a photo of the powerful gesture stating, “They sacrifice so much for us, we can sacrifice for them too!!! #RespectOurMilitary”

They sacrifice so much for us, we can sacrifice for them too!!! #RespectOurMilitary pic.twitter.com/hOHuc3zLGH

Although the Junior ROTC member is still a service-member-in training, this incident foreshadows the respect he will receive as a Marine.

A picture if worth a thousands words, and these photos show what America is all about — respect for our servicemen and women.