Memorial Day: A look at how Americans honored fallen soldiers - The Horn News 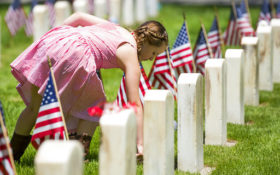 Americans marched in Memorial Day parades Monday and came together in solemn ceremonies to pay their respects to those killed in service to the country.

Remembrances of fallen military members went from New York City, where Memorial Day fell on the last day of Fleet Week New York, to Los Angeles, where an 8-foot bronze sculpture was being unveiled in honor of the dead.

The day also coincided with historical moments — the 100th anniversary of the birth of President John F. Kennedy. A wreath was placed at the gravesite of the 35th U.S. president, buried at Arlington National Cemetery in Virginia, alongside hundreds of other veterans.

The cemetery also was visited by the current president, Donald Trump, who laid a wreath at the Tomb of the Unknown Soldier at the annual ceremony there.

In New York City, the military presence had been notable all week, as several thousand sailors, Marines and Coast Guard members were present for Fleet Week New York, ending on the holiday. The ships that brought them were scheduled to leave Tuesday.

Thousands of motorcyclists took to the streets of Riverside County, east of Los Angeles, for the annual West Coast Thunder ride. The event honors lost service men and women. Quieter commemorations in California included a cemetery walk and community picnic at the Presidio, a park and former military fort in San Francisco. In Los Angeles, the Enduring Heroes Memorial sculpture was unveiled to show a combat soldier hoisting the American flag, a monument to service members from the Pasadena area killed in Iraq, Afghanistan and while fighting terrorism.

Arizonans gathered at four veterans cemeteries across the state to honor service members who died in conflicts. The events in Phoenix, Sierra Vista, Marana outside Tucson and at Camp Navajo near Flagstaff drew hundreds of people. Gov. Doug Ducey issued a statement urging Arizonans to pause from holiday celebrations and remember those whose sacrifices made the day possible.

“They answered the call of duty, dedicated themselves to a higher purpose, and, when the time came, gave what Lincoln called their ‘last full measure of devotion,'” Ducey said. “This day is their day, and we are eternally grateful for their sacrifices.”