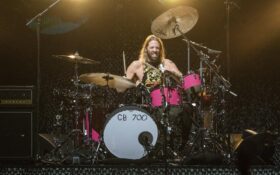 The shows will take place Sept. 3 at London’s Wembley Stadium and Sept. 27 at The Kia Forum in Inglewood, California.

Each concert will benefit charities chosen by the Hawkins family.

Hawkins died March 25 during a South American tour with the rock band. He was 50.

Hawkins joined Foo Fighters in 1997, first appearing with the band on the tour supporting its sophomore album “The Colour & The Shape.”

He made his recording debut with Foo Fighters on 1999′s “There Is Nothing Left To Lose.”

Hawkins played on every subsequent band album, including “One by One” and “In Your Honor,” and on hit singles like “Best of You.”