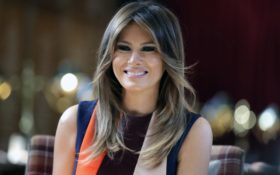 First lady Melania Trump’s plane was forced to return to a Washington area military base on Wednesday because of smoke in the cabin, temporarily delaying her trip to a Philadelphia hospital.

Her spokeswoman, Stephanie Grisham, said “everyone is fine and everyone is safe” after the plane returned to Joint Base Andrews.

Mrs. Trump was using a different plane for the visit, where she planned to meet with families of children affected by exposure to opioids while in the womb.

According to TV reporters traveling with the first lady, the original flight was in the air about 10 minutes when smoke filled the cabin. A member of the crew handed out damp washcloths for passengers to put over their mouths, and Secret Service agents rushed to the front of the plane.

It was not immediately clear what caused the problem on the aircraft, a Boeing C-32A identified as “Bright Star.”

The event was planned for Thomas Jefferson University Hospital, where Health and Human Services Secretary Alex Azar was to join the first lady. The hospital has provided care to mothers with opioid use disorder and their newborn children for more than 45 years.

Mrs. Trump was to tour a neonatal intensive care nursery and speak at an HHS conference on a new system that tracks infants suffering from opiate withdrawal.

The first lady’s visit was to be one of stops as she promotes her “Be Best” campaign, which focuses on issues affecting children, including the importance of healthy pregnancies.