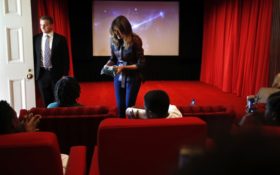 First lady Melania Trump invited sixth graders to the White House on Tuesday to watch a movie about kindness as part of her anti-bullying campaign — even as her office pushed back against one of the first lady’s own critics on Twitter.

Earlier in the day, Andy Lassner, the executive producer for Ellen DeGeneres’ television show, tweeted that he was more afraid of “another Melania” entering the United States than any of the thousands of Central Americans walking in a caravan toward the U.S. border.

The first lady’s spokeswoman, Stephanie Grisham, replied online, saying Mrs. Trump was hosting children at the White House to talk about kindness. “Should I save you a seat?” Grisham asked Lassner in a tweet.

Thank you to the students & teachers from @DPApcs who joined me & @BetsyDeVosED to watch the movie #Wonder in the @WhiteHouse theater today. What a wonderful message! #BeBest #BullyingPreventionMonth #ChooseKind pic.twitter.com/rdGjOfcnCm

Kindness indeed was the message the first lady imparted to the students who joined her for a screening of the movie “Wonder.” Kindness is a core belief of her Be Best campaign, which focuses on social media and online behavior.

“As you know October is National Bullying Prevention Month,” she told the students from the Digital Pioneers Academy, a new computer science charter school in southeast Washington, D.C. “I encourage everybody to be kind to each other — treat each other with respect in everyday life and on social media.”