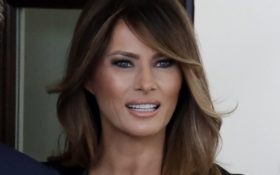 The first lady visited with wounded service members at Walter Reed National Military Medical Center after traveling to the Washington-area hospital on a trip the White House did not publicly announce until after she had arrived.

Mrs. Trump tweeted later Tuesday that she had a “wonderful visit” and offered thanks to the “many dedicated service members & medical staff who take such good care of our men & women in uniform.”

I had a wonderful visit to @WRBethesda today. Thank you to the many dedicated service members & medical staff who take such good care of our men & women in uniform. pic.twitter.com/iPjxyRhY4H

Melania sat and talked with several service members, including one who had a Trump campaign sticker on the back on his wheelchair.

Today @FLOTUS visited @WRBethesda and posted a photo of @USMarineCorps Sgt. John Peck. Not sure if she saw the back of his wheelchair, but I was with him on Saturday and took a photo that I believe her and @POTUS @realDonaldTrump would appreciate. #purpleheart #TRUMP pic.twitter.com/1h1qUbbWy2

The Walter Reed stop followed recent separate trips by the first lady that were not publicized until she arrived at her destinations in Texas and Arizona along the U.S.-Mexico border.

What a classy first lady we have been blessed with!